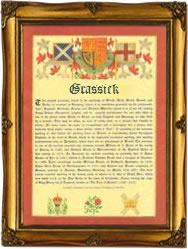 This is a rare surname of Gaelic – Scottish origins. It derives from the word “griasaich” and can have several meanings including embroiderer, decorator and more latterly, shoe or hose maker. The surname is unusual in that it is occupational when most Gaelic names were patronymics, and based upon nicknames for the original chief of the clan. It is said that Grassick is most popular in the far north and specifically Aberdeenshire, where the pronunciation is as Gracey! As a result that there are spellings as Grassie and Grass, and indeed these seem to predate the actual Grassick recordings with that of John Grasse of Kirktoun of Crathe appearing in the tenants list in 1539. However it is more likely that earlier registers have gone missing, since the keeping of such items in the past was not given any great consideration. Other early examples of recordings include Donald Graycht at Lochalsh in 1548, Elspet Grassiche of Tullochaspak in 1612, and David Grassiche of Kepache. He was a bit of a lad who was accused of “violence” in 1617, although his fate is not known. Another to fall foul of the authorities was Alexander Gresiech of Towie in 1669. He was accused of curing cattle by charming them!