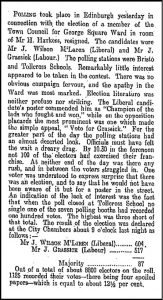 James Duncan Grassick was known in Edinburgh as a champion of the working class, and in particular the blind. Born in Leith, he lived most of his life in the poor inner-city area of St. Leonards. This part of Edinburgh was renowned for its poor sanitation and health record. For example, in 1915, 25% of the monies allocated by Edinburgh Council for “civil distress” were spent in this one ward.

St. Leonards was an area that workers aspiring for better things wanted to leave. But James Duncan was blind – as was his first wife Isabella (Bowie) Grassick – and he had little chance at a time when such disabilities were simply accepted as meaning fewer chances in life. Instea

d, he campaigned on behalf of both the blind and the workers generally. He was chairman of the local ward Labour Party, and in fact stood for election to the council in 1920, losing to the Liberal candidate in a by-election notable for its poor turn-out of 12.5%.

James Duncan was also the Blind Workers Union delegate to Edinburgh Trades Council. Interestingly, his grand-son Harry, and his great-grandson Richard, would both go on to become delegates to their local Trades Council, Harry in Edinburgh and Richard in Darlington.

James’ wife died in a tragic accident in 1907. Blind, she fell down an unattended open manhole belonging to the local Gas Board, who subsequently had to pay around £600 compensation to James, blind and widowed with two small children aged 12 (James Duncan junior) and 10 (Jane McGregor).